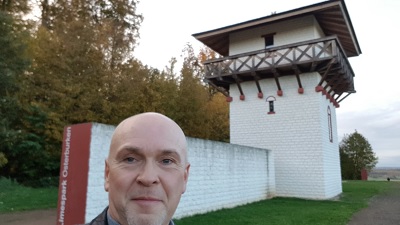 The discussions about the Battle of the Teutoburg Forest had never particularly interested me, because for me – so to say as a fan of the Roman Empire – this was as exciting as discussions about the greatest defeats of my favorite soccer teams VfL Bochum and FC Zurich, this is why for a long time the Kalkriese area for me was not questionable as the site of battle.

Then the 400 m long Oberesch wall construction was discovered in Kalkriese, a battlefield-preparation construction certainly as remarkable as unusual for Germanic warriors. I found it very unlikely that this construction should not have been mentioned in any of the ancient sources on the Teutoburg Forest Battle, and I started to think about alternatives for the site of the battle. I tried to define the requirements of the Romans in Germania, and where these requirements could be realized efficiently in Germania.

By this the whereabouts of the Romans in Germania could be determined, and thus the roads between these places, where Arminius was able to attack the 3 Roman legions. For the engineers among the readers: requirement specification and functional specification do always work.

Meanwhile the scope of the considerations is beyond the Battle of the Teutoburg Forest, this is why betimes I have renamed the website of TEUTOBURGIENSIS in ALISONENSIS.